Skip to content
This page may include affiliate links. Please see the disclosure page for more information.

For over twenty years I had no clue had to use credit cards properly.  I was given my first credit card at age eighteen with very little explanation, but knew I would not be paying the bill. You could consider my parents my accountability partners at that time, but at eighteen years old, I just didn’t want to deal with explaining how I was spending their money on the card, so I spent wisely.

As I got older I applied for my own cards and soon began to carry a monthly balance. I liked having the immediate access to spending when cash was not available. I could easily manage the monthly payment over time. Little did I know that this way of thinking would cost me hundreds if not thousands of dollars of interest over the years.

Now introduce a wife and kids to that philosophy of spending and it really multiples quickly. One or two credit cards turn in four or five, and monthly payments ballooned from a few hundred dollars to almost two thousand over the years.

It still felt normal. We justified the spending, and living beyond our means by telling ourselves everyone else did it.  Everyone has credit card debt. Those words made us feel better until the next monthly bill arrived in the mail, but that pit in our stomach was soon forgotten and we moved on.

It was that rock-bottom, aha moment while planning our summer vacation that was our wake up call. Out of cash, and borrowing option we had to make a change.  We had to change our behavior with money, that meant discipline. Discipline like we have never seen before, saying no, sacrificing and cleaning up the mess we had made by overspending with credit cards. 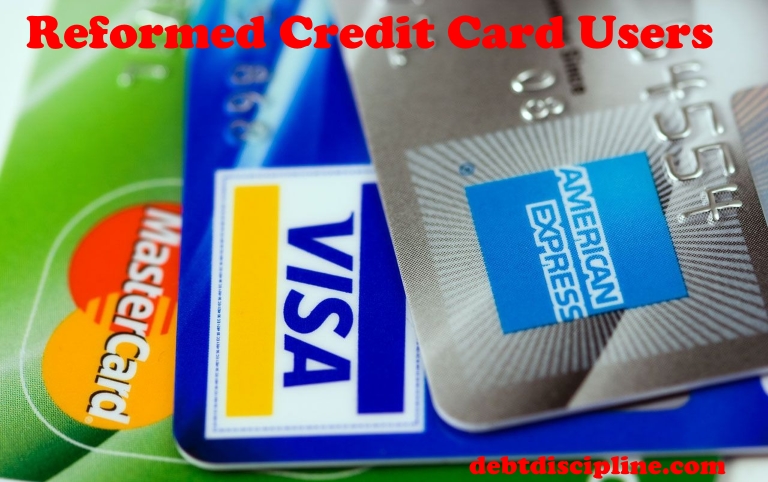 Once we decided that we need to make a change with our money, we began to education ourselves on all things personal finance. We cut up our five credit cards and began working on repaying their balances which total $109,000. We followed these outlined steps:

We were able to cut expenses and increase income to help pay down our debt. We learned that it could all be done without credit cards. That by simply saving up cash for a purchase instead of using a credit card to pay for something you couldn’t afford you can avoid debt.  We followed that plan for a little over four years and became debt free in 2014.  Along that debt free journey, we also learned that once you reached that point you could use credit cards different in a way that we ever thought possible. A way if used properly could actually earn and save you money.

How We Use Credit Cards Today

During our debt repayment, we swore we’d never open another credit card account again. It took us a few month post debt pay off to even consider the idea. We wanted to be sure we were ready to handle the responsibility of a card. We felt we were and targeted a Southwest Airlines Rapid Rewards Card.

We chose the Southwest Airlines Rapid Rewards Card because we wanted to try to earn airlines miles to reduce the cost of travel. For a family of five airline travel can be expensive. We started out slowly using the card, but wanted to meet the spending requirements of $2000 in the first three months to collect the bonus of 50,000 Rapid Rewards miles.

We were able to accomplish this, and pay the credit card in full before the end of the month. We use it for everyday purchase like gas and grocery shopping. We did not use it to buy things that were not budgeted for or that we did not already have the cash for. We did not want to fall back into our old habits. With a few months under our belt we felt confidences in our new abilities to handle credit cards now.

This year we added the Chase Sapphire card. It offers a bonus of 50,000 Chase Ultimate Rewards points when you spend $4,000 in the first three months. Again, we followed the same rules of using it for everyday purchases and paying it in full each month. We chose the Chase Sapphire card because you can transfer point to a few different reward programs. Southwest being one of them.

Using these two cards we were able to accumulate enough reward miles to purchase four of five airline tickets for our summer trip this year and save over $2100. If you would have told me five years ago that I could use credit cards and save money I would have could you crazy, but using them in the above manner did just that.

We have added a third card recently the American Express Starwood Preferred Guest Card. We joined when they were offering a 40,000 bonus if you spent $4000 in the first three months. We decided on the American Express SPG Card because we would like to plan a trip to Orlando in the future and these points can be used to book hotels at Disney.

The goal with these three cards is to save money when we travel, but if at any point we are slipping back into old behaviors we would close the accounts. To keep track of all three we only use one of the three in a given month. This helps avoid multiple bills. Then depending on what our travel goals are we will either use one of the airline or hotel cards.

It feels good to know we have conquered our bad behaviors with credit cards and now have turned the corner. We use credit cards today as just another tool to help save money.

What’s your history with credit cards? Do you use them to take advantage of cash back or travel rewards? If so what’s the biggest reward you’ve earned?