Last month in a post titled “Education Cost” I ask the questions should a metric like ROI be used when picking a career path, well the folks over at PayScale have helped answer that question with their recently released College ROI report. In order to calculate the return on investment on a college degree, PayScale first determined the actual cost of attending college, (including tuition, room, food, books, etc.) then the gained income received by obtaining a college degree over a high school diploma. However, a high school graduate has a 4-year career head start. So an earning differential is also calculated into capture the 4-year head start. This is then looked over a 20 year period. For example, a school with a $1,000,000 Earnings Differential for graduates and $200,000 in Costs would have an $800,000 20 Year Return on Investment or an average $40K per yearly salary. Get it? Good, because it took me a little while to digest it all but once I did this report seems super valuable in helping college-bound students make better-educated decisions on school and major choices. Much better than picking a major and a college and not understand the cost or the possible ROI on that investment.

I have two soon to be sixteen-year-olds in my house and the topic of college is starting to come up. My son is leaning right now to a focus in computer science and my daughter in the arts (drawing, painting computer graphics) so let’s use them as examples and see how this report might be helpful.

For my computer science guy I sorted the report by the total 4-year cost to find the cheapest tuition. BYU ranked among the cheapest with one of the top ROIs.

Next, I found a number of in-state schools (out of state for us) with low over cost and high ROIs. 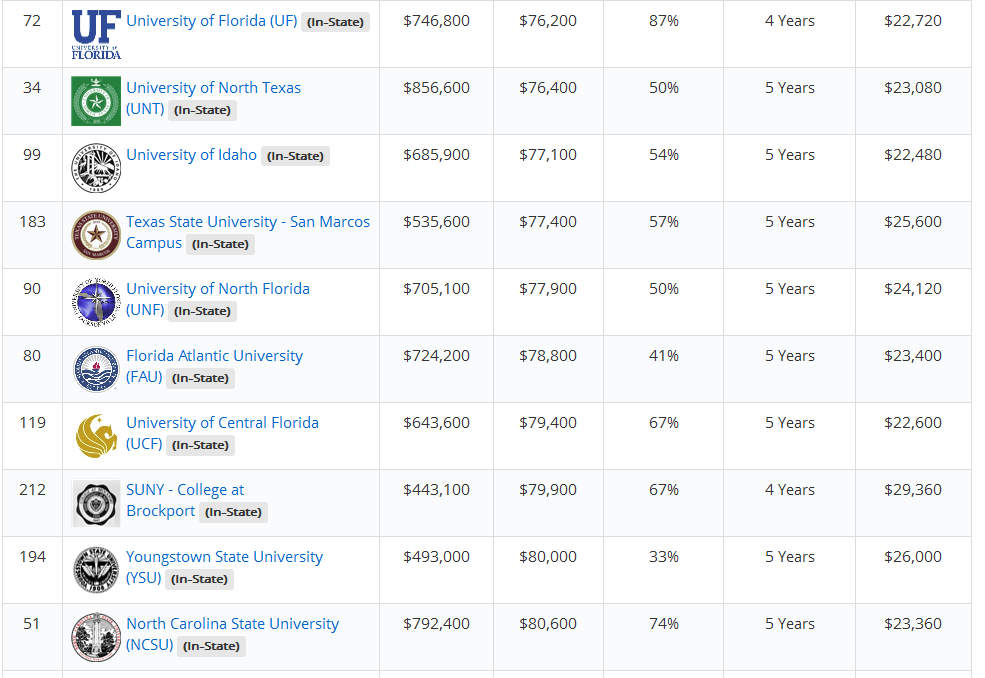 The Top in-state school for us in New York was Stony Brook.

For my art school girl, I sorted the report again by the total 4-year cost to find the cheapest tuition. BYU ranked among the cheapest with the top ROIs.

Next, I found a number of in-state schools (out-of-state for us) with low over cost and high ROIs. A much smaller list for an Art major and a big difference in the ROI numbers.

The Top in-state school for us in New York was FIT.

It’s pretty clear there’s a big difference between a computer major and an art major, but I already knew that, but these data points really help illustrate it. It clear we need to pay more attention to the school of choice for my daughter if she pursues art as a major, because of the ROI on that major, we’d be wise to steer our son to a mid-tier school or an in-state school like Stony Brook where he’s getting earnings values for the cost of his degree.

Have you every evaluated college and a degree using data like this? Do you find the data in this report useful?

21 thoughts on “College ROI: How To Calculate If It Is Worth It”